A new blogbanter is up on Kirith’s site and I feel to compelled to participate.

“Is there any path for CCP to follow to raise those numbers upwards for a sustained period, or is EVE going to enter a decline to lower logged in numbers from this point? How soon will we see an end to this plateau? Months? Years? Or will you argue that ‘never’ is a possibility? Or you can look at the root causes of the plateau and tackle the question if it could have been avoided or shortened if CCP had taken different actions in the past.

Also, what would EVE be like with an order of magnitude fewer or more players?”

Ok, lets start with the elephant in the room or the dead horse needing to be flogged, whatever analogy seems fitting.  Does EVE actually need more players for it to be fun and commercially successful?

Lets pull back a little and look at the MMO market.   The best primary research I found comes from the (unfortunately discontinued) MMO Data.net, if there are better sources, please let me know in the comments. 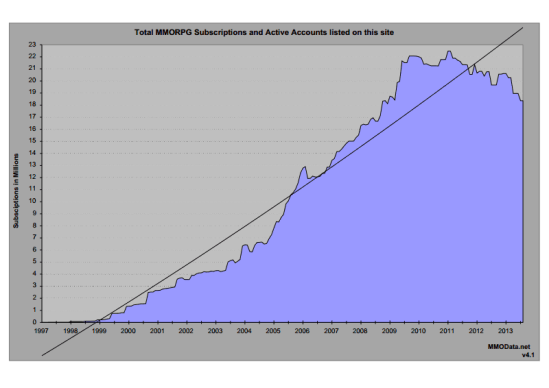 Overall, it looks like that the overall MMO market is plateauing at best or shrinking at worst.  Lets set aside the technical caveats on this figure (lack of data published by game companies for example). These errors should (big assumption) be consistent across time and not impact the relative trends.

Whats up with the overall market?  Well, the standing hypothesis is that the PC (=1 screen) market is shrinking. Games need to be either portable (which means iOS or Android), console or be played at work / school (facebook) and not in dedicated sessions. The computer as the center of game time has displaced the TV and is being displaced by the tablet.

I don’t trust market research but occasionally I quote it – always with the caveat that selection bias rules in these surveys and that I can pretty much prove any theory with data I can pull from the internet. This report seems to be better than most:

A couple of key points from this presentation:

The numbers show a solid growth in players (US, +34%), time spent (+69%) and payers (+35%).  But in overall money, only 17% increase.  While most industries would kill for a 17% actual growth rate, these numbers highlight a real issue – more people play games, more people spend time doing, more people pay but they seem to be paying incrementally less.  In general, this is the hallmark of a market that has moved from specialized product to commodities.  And of course, games virtually stand no chance if they are not free to play up-front at least for a demo (which better be good) or – like DUST – free to play with the option to purchase in-game items.  I may be in the minority but I sometimes download game trials, spend 20min or so playing them and then decide that I had the full gaming experience and don’t need to buy it.  Those 20min will make the purchase decisions.  Try that in EVE or DUST….

Ok, so if the MMO market is sliding because mobile platforms are eating the “fixed screen’s” lunch, are we all doomed?  Do we all have to play Candy Crush?

First of all, what is the historical distribution for MMOs by genre: 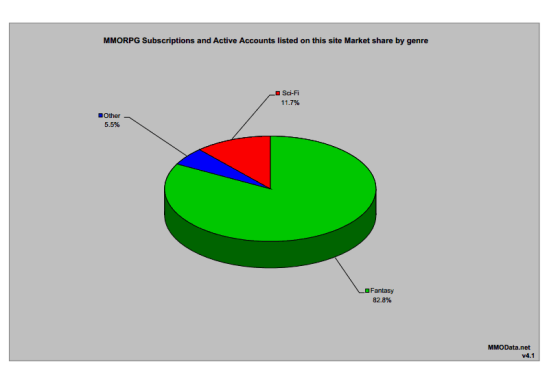 Ouch, yeah. Fantasy-based games dominate the market, WoW and its myriad of temporary clones are crowding out the SciFi market.  Massive market failures in our genre don’t help either.  An overall shrinking market, a rapidly eroding “one screen” gaming environment, the rise of free-to-play and a tiny sliver of SciFi games should not make CCP’s investors feel all warm and fuzzy.

Well, not so fast.  I have written about the long tail before.  Without repeating myself, there are viable markets for games outside the middle of the distribution curve.  The overall gaming market grows, after all, so I don’t think MMOs are doomed.  The question is, what kind of MMO will succeed.  I can see only two drivers for the MMO market that will make people fork over money, a) it needs to engage on several platforms, b) it need to capture new players within 30min or so.

Well, yes and no.  Engagement doesn’t happen in the game client, it happens in the metagame.  EVE is a lot more fun to read about than to play.  And reading about it, I can do that on my smartphone on the bus.  So, we are not doomed here.  Secondly, EVE has a terrible new-player-experience. CCP must address this by any means possible or it chokes new blood and will become stale.

Not sure I really answered the BlogBanter.  EVE has shown to be very resilient and tough against against an overall competitive and shrinking market.  EVE has grown over the last few years or at least held stable, much more than can be said for WoW or other MMOs.  The resilience stems from CCP’s unwavering support of the hard-ass community, EVE is the last refuge of the politically incorrect, the desperadoes of the gaming world, the mature, the adults, the hardened veterans of many games. As the market increases and caters to the soft middle, the tails grow longer. So, I can see a future for CCP doesn’t screw up again and again and limits itself to put pathetic little tweaks out as “expansions” but boldly goes where nobody has been before.

Bring back the Jesus Features!

Participants:
Faction Fit Pod – Steady As She Goes
Sand, Cider and Spaceships – Eve is in a Coma
Roc’s Ramblings – The Other Side
Golden Crusade – What’s on the Other Side?
Warp Drive Active – Falling Down
Freebooted – Homeostasis
Eveoganda – The Graph is a Lie
Morphisat’s Blog – Over the hills and far away
Inner Sanctum of the Ninveah – Limits
Life on the Bubble – Art of War Alliance – Enjoy the Ride
In Local, Everyone Can Hear You Scream – There Is No “Other Side”
Mabrick’s Mumblings – Causalities of War and Industry
Evehermit – Are we at the base of the mountain, or on top of it?
Pilgrim In Exile – The EVE of the Future
Oz Ox In EVE Blog – But Will It Tick?
Fua Consternation – Just another day as an astronaut
Jester’s Trek – Another way of saying “never”
A journey through the mind – Flogging a Dead horse
A CARBON Based Life – Live Fast and Die Young, or…
Mad Haberdashers – Most Plateaus End In Cliffs
Diaries of a Space Noob – EVE Mentality
Khanid Kataphract – Living Space