I have been meaning to follow up on my experiment with World of Warcraft.

So, just quickly backing up, I left a decent WoW Raiding Guild after Wrath of Lich King and skipped over Cataclysm and Pandaria without even thinking about the game.  I was just “done”.  Blizzard’s marketing department sent me invites and reminders and when “Warlords” came out, I thought, why not, get the 10 day free offer and try it out again.

During these 10 days, I played quite a bit actually, and I must say, I had fun.  Progression was ridiculously easy – I blew through the content especially after I followed the advice of a friend to swap my “Cataclysm” zone from the underwater one to the one on Mount Hyjal.  The novelty of diving had simply worn off after so many fetch quests and while they were extremely quick and efficient, I always had the feeling that I am in some arcade shooter.  One of the redeeming features of WoW is its grandiose size.  The world is huge but underwater settings reduce that feeling.  Mount Hyjal was more interesting, scenery-wise and I had more fun doing these “kill 10 rats” quests.  Of which there were dozens!  Its a never ending chain of NPC standing around with more and more things to kill, stuff to fetch and occasionally people to escort.  I tried to concentrate on the text and follow the storyline but really, I couldn’t.  The effort to put into a single quest is extremely little, you can knock them out in 2-3 minutes.  Mobs die with 1 shot even on a severely unprepared character and the spawn rates are so high that – on my hunter – I nearly always have something in range.  So, I spent 30seconds reading a NPC quest and 2 minute killing things?  Its a bit lopsided.

But hey, who said WoW is for children?  One of the quests asked me to capture and torture a Harpy.  Harpies are scantily-clad flying female things and seeing one restrained and questioned makes me wonder where the age-police was that day.  I never enjoyed these types of quests but I was positively surprised that Blizzard allows some form of edginess in their game after so many years of watering down the content. 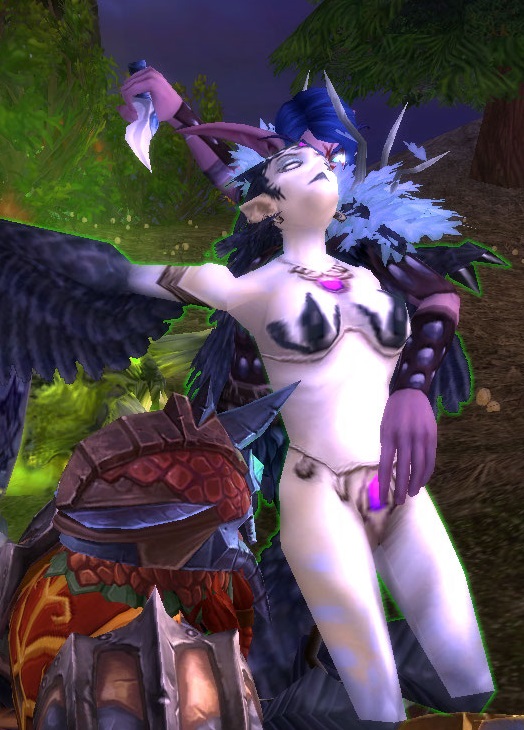 Anyway, the chain of quests persists and I end up in some enormous cavern killing golem-like things by the hundreds.  Other players are zooming around as well but there is no interaction.  The gear I get is apparently better than what I had and I freely swap out with seconds of contemplation, knowing that the next quest could give me another upgrade entirely eliminates the need for any form of investment into gear.  I also have so much money that I start vendor trashing everything.  With one exception, I somehow had ended up with a bow and that’s just not right. Dwarfs have guns,  a trip to the auction house, 500 gold spent on the highest level gun that was for sale, throw some scope on and I am happy again.  Boom!

I mentioned a couple of times how easy the game is and that was actually a surprise.  Being able to lay waste to stream of mobs within an extremely short period breaks the immersion.  Only once did I get into trouble when I had pulled 10 or more mobs at once.  For some reason they were stacked really close, there were 2 wandering patrols and something respawned on top of me.  My core hound was getting really close to being killed but he didn’t, some deflection some feign-death and I was in low health but surrounded by a pile of corpses.  My pet had a grin on his face, finally a challenge.  That fight was actually fun.

Ok, so if these quests are too easy, maybe I should change zones?  I take my flying mount and simply aim South to Uldum.  I always liked Taranis, the desert, so this is my kind of zone.  I land in town, get the flight path and look around.  Nice town, lovely architecture, a king of some kind, very few players.  And no quests.  None. I read up on it and realize that one needs to get a starting quest given to open the quest lines in this zone.   This narrow rail that I am on, where I am literally told where to go and what to do is the single most annoying thing in WoW.  I am used to EVE Online where I can where I damn well please – and likely get killed in the process but hey, its my decision.

With nothing to do in Uldum, I fly out but not before I land on some bright red lvl 84 mob and engage him.  Maybe they are too hard for me, maybe I should stay away.  Nah, it dies within seconds like a mob 5 levels below him.

Ok, so this questing isn’t working for me.  Lets try a dungeon.  I sign up for the dungeon queue and am a bit apprehensive. I have no idea about the dungeons and bosses I am about to face, no clue who my team mates will be and am only beginning to understand what shot rotation is getting the maximum dps.  Its one thing to goof around alone but I don’t want my noobness to be the detriment of others.

The instance starts.  No words are exchanged, the tank pulls a ton of mobs and I start shooting.  Stuff dies, gets looted.  We run down corridors. Nice instance, actually, where am I?  Who are these mobs?  I have no clue.  Some trashmobs die.  We jump of some ledge – I remember this was a dangerous mechanic for hunters, I may jump down somewhere but my pet will try to take the long road and in the process aggro the entire instance.  I urgently dismiss my pet (that wave!) and jump.  My group has already cleared the next 2 rooms and I have actually trouble finding them.  Nobody speaks, I try to make conversation but nothing.  A boss chamber.  The tank finally says something along the line to stand behind him when a spike or something happens and pulls.  Oh dear.  I have no idea whats going on.  But hunter’s credo: if in doubt shoot and keep the pet nearby.  Don’t stand in goop, don’t break LoS with the healer. And the boss melts in seconds.  Yes, there was some effect but I have no idea what it was.  The instance is over, people leave the group and that’s that.

It was the fastest instance run I can remember. I’d say it was under 10 minutes, really like Left 4 Dead runs with minimal preparation or planning.  I kind of feel sad for the designers – the scenery was actually pretty nice but there was no time to see it, explore, learn what this is all about.

Well, this is it, I guess. I had my 10 day World of Warcraft fix and found it lacking compared to EVE or even Planet Side 2.  The two quintessential items of an MMORPG have been removed by Blizzard from the game entirely.  The “massive” aspect is reduced to the exact content that one is allowed to see at any given time.  Its like taking a train through the mountains – very pretty but you only see what happens to be outside of the window.  Only by leaving the train and hiking will one ever see the vastness of the ranges.  WoW has removed the incentive (not the ability) to do that.  Secondly, pickup-groups (Pugs) used to be the bane of WoW, they were awful and a key driver for people to socialize, join guilds and learn the game.  Not anymore.  I ran 3 instances or so, back to back, with zero human interaction.  I assume in end-game raiding one really has to have a better team but for the casual player like myself, other players may as well be NPC.  The “multiplayer” aspect is gone.

Where does that leave me?  I wanted to like WoW, I really do. I am still attached to my character – Splatus, this damn blog is named after him! – but Blizzard successfully made the game for other people now.  I let my 10 day pass expire and may come back in 2 or 3 expansions.