EVE Vegas is in full swing and watching #evevegas  and CCP’s stream makes me reminiscent of last year when I was actually in the audience, sitting next to the mercenaries and squealing with delight about announced capital changes.  Good times were had and I am sure my space friends are right now engaged in epic benders, smoked-filled rooms diplomacy and generally giving EVE nerds a good name.  Its even more of them this year than last and I am getting the feeling that EVE Vegas 2017 will be a thing for me especially since it looks like that an IOS (Illusion of Solitude, our Alliance) meetup could be a thing.

So, watching EVE Vegas makes me both nostalgic and highly excited about the game and the community.  So, why haven’t I logged in in nearly 2 weeks?

For once, work has been annoyingly intense, not so much in complexity of the work itself but I am simply not used to the concept of political infighting.  This reduces my attention span for game-related things from my normal low level to that of a gnat.  And EVE is just not the game you can pick up and play for a few minutes, get a rush and log off.  I tried that a few years ago with RvB but fundamentally, EVE is a game played in 1 hour length or more sessions.  I am not saying EVE should have arena-style, inconsequential fights but unfortunately, that is about the maximum I can currently deal with.  A phase that will surely pass, in fact, next week looks good.  In the meantime, I downloaded War Thunder and while I have no clue how the game actually works, I am having fun blowing up tanks.  Its pretty well done and it provides a 15 min kick and adrenaline rush. 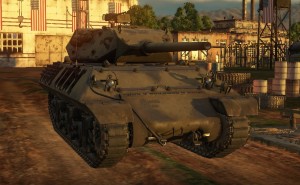 I have absolutely no idea which tank this is.

War Thunder is everything EVE isn’t and for now it works for me.  But I still miss my spaceships and am looking forward to logging in with my space friends.