As both of my remaining, loyal and handsome readers know, I play and write about EVE Online, a spaceship multiplayer game where real people matter.  I created my first character sometime in 2009 and have been subscribed pretty much continuously since then. EVE is – needless to say-  an awesome game, in fact, the best MMO(RP)G still on the market.

However, sometimes, when Real Life goes busy, my patience for EVE- or any MMO –  is just not there.  Especially in Wormhole Space where the connections vary and hunting – while amazing fun, is never done in 1 hour, it takes time to scout, assess the situation, set up the ambush, call in the team, spring the trap etc.  And while there are many other facets to EVE, I have never been able to “get into it”, not the massive Nullsec fleets, RvB, industry, mission running etc.  No, “EVE” for me is “WH” space and its just a time sink at the moment I can’t really afford.

Well then!  Other games have always had their place in my life, a quick pickup in Planet Side 2, a side quest in Fallout 4, Skyrim, a skirmish in Destiny or cleaning out an outpost in Far Cry – all of these games I have played, enjoyed and eventually put down, they served a temporary, quick fix for 30min and then I can move onto other things.  The exception to that rule had always been No Man’s Sky, one of the two games I purchased pre-release when it was – officially – terrible.  I recently came back since Hello Games had pushed quite a few serious updates and screenshots / reports from the game looked pretty good.  So, I thought, whatever, I already own it, may as well reinstall and try it out.  Nothing to lose.

And what a game it is.  Unreal.

So, let me back up – when I bought the game in 2016, I really wanted a solo-SciFi, space exploration game.  Basically like EVE but without irritating hostile players, without industry grind or repetitive missions and just exploration of “stuff”.  Just me, my small ship and the universe to explore.  That was what I really wanted from NMS and while it didn’t deliver at launch it really has done it now.

By now, I am 50 hours into the game and have most of the basics figured out.  I follow the story arc fairly closely with a few side quests here and there.  I am not a dedicated “base builder” (yet), the story is interesting, has good rewards and I have not seen a planet to really call “home” yet.  I am sure this will come but I do also like the nomadic nature of zooming around star systems, landing on an unknown planet, hop out of the spaceship only to be nearly roasted to death by the environment and chased around like Benny Hill by overly ambitious drones.  I had to build a couple of bases for the story arc but they are unloved collections of modules thrown on the ground without care, they are not permanent by any means.  Nah, there is too much to discover. 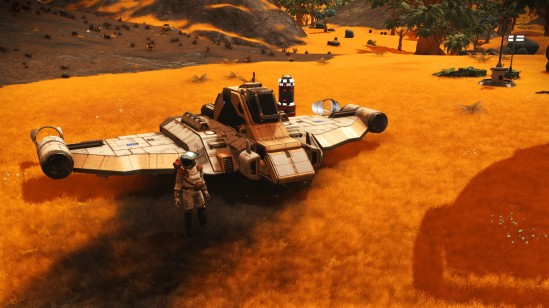 Just me and my tiny shuttle landing on an unknown planet, taking a look around.

Right now, the story had me land on a planet with fairly hostile drones who kind of make my life miserable on land but don’t follow me under water.  The quest-line made me discover a (space) ship wreck under water and asked me build a small, globular submarine that I am to pilot beneath the surface.  The graphics and sound effects are incredibly well done and the experience of slowly gliding through an alien reef is incredible – in fact far more interesting than flying through space.  I had sort of known that underwater construction was a thing but I had no expectation just how well thought through it was, how immersive (sorry, couldn’t resist) the underwater environment was and how punishing some of the mechanics could be.  For example, the quest asked me to pilot that little submarine to a new location but by attempting to take a shorter route, I got thoroughly lost in a network of underground caves.  I tried to blast my way out, creating a tunnel, was chased by hostile drones, stung by jellyfish, poisoned by exploding plants, pinched by a fat clam and scalded by a hot vent.  All of that while running out of air and resources.  I had to give up and restart from my last “Save” which is in No Man’s Sky not that straight forward. Basically I lost 45 min worth of progress, something that has not happened to me in any game in a long time…

So, No Man’s Sky is back on my list of games and to judge from the interwebs, it has fully redeemed itself.

Here is to the comeback kids – the guys who were pronounced dead but miraculously pulled themselves up, surprising everyone.

By the way, big shoutout to Twitch Streamer “TheManAnimal“.  What a legend  – chilled, easy going, knowledgeable, funny.  You, Sir are the Man.

3 responses to “The Comeback Kid”