So, here we are – we are stalking a C1 Wormhole corp that routinely mines in Rorquals and has two Dreadnaughts on standby.  We decided to remind them gently that Wormhole space can be a little bit more dangerous than High Sec.

Just to be clear, we never wanted to evict them from their C1. Evictions can be a lot of fun (from both sides…), they offer content, kills, teamwork and camaraderie, just in this case, we did not see a reason for it.  Removing an industrial / mining / new-bro friendly corp brings neither challenge, honor or reward, just boredom.  It also wouldn’t have made Wormhole space more interesting in the long run.  No, this would be an old school hit&run ambush.  My kind of EVE…

Back to the ambush.  Since I spotted the Rorquals, we brought in additional scouts and kept gathering intel. As a EU-based corporation, their timezone was not ideal for us, on a weekday, they would close their mining operation before our team would be home from work.  We decided to launch our ambush on a Saturday with the Sunday as backup in case they watch football, eat sausages or whatever Germans do when not working or mining rocks.  We planned 2 weeks out and put out a ping to our friends and acquaintances.  For security reasons we just told them that we had “a thing happening” and “be in Amarr with ISK“.

Traditionally, Wormhole ambushes are log-off traps, i.e. we would bring in all of our assets during the week whenever the target is asleep and keep them logged off until its time to execute.  That works well because the target can feel perfectly safe, roll off the their connections, guard them, let them go EOL, whatever.  Unfortunately, during this timezone we didn’t have the numbers willing to do the log-off trap (for several days, after all) and we decided to have 2 separate fleets.  One that tackles the Rorqual(s) and survives whatever the target brings on field.  A second fleet then burns in from Low Sec mostly in Logistics cruisers.  Since that second fleet would be formed by “friends” of ours, getting Bookmarks and doctrines right would be really important.  The new Bookmark system had come out literally that week  and were giddy with its capabilities.

So, during the week, we filter in our core fleet via Low Sec and convenient Wormhole chains.  Our target is predictably quiet during our timezone and we have plenty of scouts.  Aside from a couple of close shaves with Low Sec gates, nothing really exciting happened.  Since its a C1 hole, we are bringing in armor cruiser / Battlecruiser DPS and cruiser Logistics, plus a few cloaky, heavy T3Cs for additional intel, tackle and scouting.

Saturday arrives and our team is on standby.  Our scouts report no activity at all.  First time in 4 weeks that there is no mining going on.  I am a little suspicious, wondering if someone somewhere saw us but we all call it just bad luck and move the operation to Sunday.

Sunday rolls in and the same as Saturday.  The target has a few people online moving around in T1 haulers and Epithals but no mining, no Rorqual, nothing.  I am really worried now that something tipped them off and re-check their wardec history on a hunch.  And yes, dumb coincidence, they started a new Wardec on Sunday against a dead industrial corporation in “their” home high sec system.  They had done this a few times before, to remove Athanors from valuable moons I assume but there never was real PvP at all which means that they would shoot the (unfueled?) structure into its timer and then have to wait for many days before the next timer rolls along.  Enough time to hang out in their C1 and go mining.  Its just bad luck again but given this information we expect them to start mining on Monday.

Now this is a problem.  Monday is a workday for us in the US and its tricky to get the numbers to kill 2 Rorquals, 2 Dreads and whatever subcaps they bring in their prime time and tank through an Athanor.  We really need that relief-fleet that we staged in High sec to be on the ball and burn in without major hiccups.  If the target mines at all, of course….

I get up early and sneak out quickly to secure the WH route.  We know the timing of these holes and unless our target rolls it off, this connection will stay open for the rest of the day, so I relay that information to our K-space friends who start moving closer – but not too close, we still have no idea if our target is mining at all.

But they do!  A Rorqual undocks, aligns sluggishly and warps off to the Athanor we already picked as the most likely target.  Noteworthy is that our target has made zero preparation, has no scouts anywhere, no probes out, nothing.  They behave just as if they were in the perfect safety of high or nullsec.  Well, to remind them that WH space works a little bit different is what we are here for. A ping goes out, our team fetches their coffees and stands by log-in screens.  Our FCs coordinate with our friends in High Sec who send their scouts ahead and confirm that the Wormhole is indeed bookmarked from the lowsec side.  Then they start burning in more logistics since we are pretty skinny right now.  If our target really fights back, we need those dudes.

Time has come – Spracklin, Cryo, Gunner, Tegan and Seraph work together to place scouts, last minute bookmarks and instructions.  I pilot 3 characters right now, my main in a Drekavac Battle Cruiser, a cloaky Tengu and an out-of-corp Stratios.  I refused to run logistics simply because I don’t trust myself to be on grid with 2 characters, so my 2 alts remain cloaked.

The order is given and the DPS/Logi team logs in, aligns and warps to the target Bookmark.  During warp everyone joins fleet, moves into the assigned squad, confirms ammunition type, hardeners and scripts.  When we land on the Rorqual a few seconds later, we are a fully formed PvP fleet with coordinated logistics.  Our HIC bubbles the Rorqual and shooting commences while our relief fleet moves to the Low Sec 1 before our entry.  The idea is that we don’t want to show our full fleet right away but try to lure out the 2 Dreads that we know exists.  In the meantime, the Rorqual dips deep into armor but suddenly holds – the pilot found the “Panic” button and the fight stops cold.  He also launched a Microjump Unit.  We have no idea why he did that but we kill it just in case.  Then the target manned the Athanor with a second character and starts fighting back.

Our 3 logistics cruisers hold well enough but if the Athanor pilot finds his stride and neuts out 2 of them, we are in trouble.  Our FC calls the relief fleet from Low Sec, one way or the other we are committing the entire fleet now. If the target wants to commit their caps, so be it, if not, we need to make sure that our friends are on the killmail.  They jump in, and warp on top of us, a very welcome sight as they bring mostly logistics. The Rorqual’s Panic Timer runs out but there is no sign of any coordinated rescue fleet and we commence shooting the Rorqual until it blows up in its spectacular fireball – garnished by Spracklin who smartly fitted a festival launcher to celebrate the occasion.  We take down the capsule and exchange “GF” in local with our target and get ready to exfiltrate.  Spracklin gets a last laugh as he lands his personal Viator on grid and loots the Rorqual – trust him to be that organized (and confident!).  All loot goes to our friends who came from K-space as “thank you”.  Their FC asked how long we had stalked this hole. I told him and take his politically incorrect response as a EVE compliment…

And this, dear kids, is how how you do it… 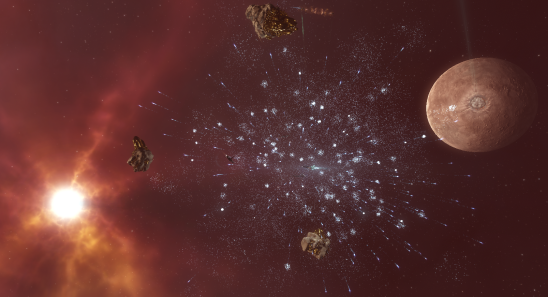