As my remaining readers may recall, I fly in Wormhole space with Anomalous Existence, famous for our recent victory over some yahoos who invaded our home, blew up some meaningless structures and failed to achieve their mission – to break our spirit.  But enough of that, I already laid out how that all happened.  Onward to new adventures.  Because, we settled a new home.  Bigger and better of course.

Alright, so we found these C1 guys when their hole popped up in our chain. It was late US Time Zone and normally I wouldn’t have bothered but the residents had 7  (!) Athanors, a Fortizar, a Tartara and a Raitaru all fueled and active crammed into their C1/LS.  This suggests intent, quite a bit of planning and organization and of course massive mining operations. C1 anomalies are worthless and PI alone can not pay that fuel bill, only Moon Mining can.  I decided to stay the night and brought my two characters into the hole, and settled in.

None of the locals were online but a quick survey showed that the residents are German (=EU Timezone), based mostly in High Sec (Miake where they have a massive presence of dozens of Athanors) and advertise themselves as pure PvE / Industrial corporation(s).  According to Z-kill, the leadership spent some time ago in Nullsec, Wormhole space and overall seems to be well-rounded. Oh, and they removed the local POCOs with at least 1, probably 2 Revelation Dreadnoughts. Having Dreads in a C1 is a fairly serious commitment and suggests that they really wanted to stay.

I logged off for the night, ready to take a look in the morning.  But real life intervened and kept me away from EVE for a few days and when I finally managed to log in, I found substantial activity in the hole, Epithals going every which way, T1 Minmatar Haulers warping as a pack from the Raitaru to a Signature and back (presumably rolling the connection), other haulers moving around, overall a busy corp doing busy things.  I keept looking for signs of a organized mining fleet but was a little weary of the Athanors. Taking down a miner in front of a well-armed citadel is quite risky if the locals are awake and know what they are doing.

I logged in a few days later during US Time zone and found the system quiet with the exception of a single mining Porpoise.  One other guy in the Raitaru but nobody else anywhere and certainly nobody in the Athanor that the Porpoise was mining at.  I had been in the hole for a few weeks now and not really seen any other mining target and decided to drop on this guy, blow my cover and call it a day.  Just in case they had some mysterious response fleet, I’d watch the Raitaru / Fortizar with my alt and do the killing with my main character. Textbook-takedown, I warped in, tackled and started shooting.  The Porpoise launched Ogre drones and aligned himself, basically did all the correct things – except bring help.  The Porpoise exploded, the Pod swam free and warped away.  My cover was blown, my ambush over, time to go home but only connection out was somewhere in Aridia with 30+ jumps to civilization and I decided to just hang out for another night and wait for the next connection.

Real life again intruded and kept me away from EVE for nearly a week before I finally could log in and try to get my two characters out.  But when I checked D-scan, I was surprised to see a full mining fleet at an Athanor.  And not just any mining fleet, this one had a Rorqual in the middle happily sucking on some mighty rock.

Now this changes things.  Of course, I can’t take down a Rorqual by myself, certainly not in front of an Athanor (even if it isn’t manned like the one I was watching was).  Its suicide – which is fine – but useless – which is not. But Rorquals make nice fleet targets and I am pinging my corp.  They get excited….

Coordinating an ambush on a Rorqual is a little trickier than dropping onto a solo miner as  I had done before. Burning one down takes time, especially if they fit the Panic Module that pauses the fight for 5 minutes – enough time for them to bring the Revelation, man the Athanor and stand up a decent sub-cap PvP fleet (if they have one).  Since its a C1, we can’t bring Battleships (Nestors excepted) and have work with Cruisers or Battlecruisers which we have to bring in first – no guarantee that we can stage outside in the LowSec since we would have no idea where it was.  But first we brought in additional scouts to get more intel and look for weaknesses and opportunities.

And then, one day, they undocked not one Rorqual but two.  That of course makes life a lot more exciting but also difficult.  The Rorquals now can “Panic” the entire fight for 5 minutes each, that means we are on grid for an additional 10 minutes.

Curiously, the second Rorqual pilot was had also been one of the Revelation Pilots that took down the POCOs – so if he sits in the Rorq’, he can’t fly the Rev’, thats nice to know, lets kill him last. Its also encouraging that the characters names give away which are flown by the same player.  I never understood why people do that, if I see AmazingJoe1 and AmazingJoe2 on field.  Free intel is never bad, though.

Oh and they have a Charon.  Not that it matters much for the fight but its cute. 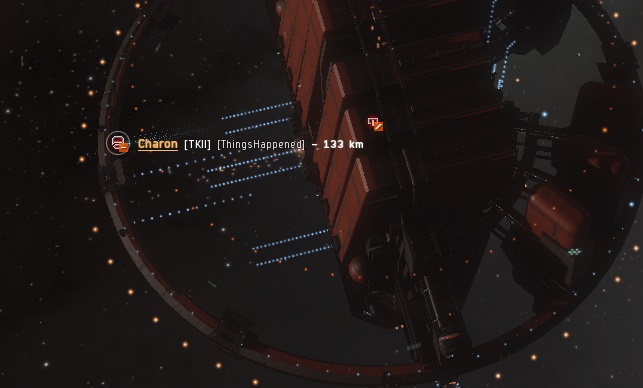 So overall, we could be dealing with 2 Rorqs, 2 Dreads (as response fleet) and a whole corp full of other boats plus an armed Athanor.  This calls for a full fleet operation.  Lets call some friends. One response to “Anatomy of an Ambush – Part 1”