It is an interesting time in EVE Online at the moment, with alpha clones supporting consistently high log-in numbers, citadels and engineering complexes sprouting faster than they can be destroyed and solid wars keeping players and main stream media engaged.  Yes, EVE has never been in a better place; our generation’s lament “EVE is dying” is dead.

It does beg to question what comes next.  The engineering complexes came out late last year and collectively we gave CCP a well-deserved Christmas break, not expecting any serious updates.  Sure, we now anticipate the release of drilling platforms that will serve as the end of the maligned (or loved) POS.  The death of pulsing, blue ball is neigh and while I fully understand the reasons behind the move, I will also be a little sad to see it go.  The whimsical soap bubble of safety, floating by itself in a J-system has always had the appearance of a makeshift hunter or logging camp promising safety and vulnerability at the same time.  Instead we get solid looking structures, mega cities that we can imagine filled with thousands of hopeful humans living at the mercy of us godlike capsuleers.  Especially in J-space, where would the survivors go when an Astrahus finally succumbs to an onslaught of foes?  It is not in human nature not to prepare for these events and I imagine the Sisters of EVE organizing caravans of rescue ships every time one citadel goes into structure.

Alright, enough philosophy.  How about my last weeks?

Well, its been one of those periods where not a single specific event shaped my online time but rather a bunch of little things that are individually amusing and collectively a mirror of what is possible in EVE, maybe even representative of the breadth of the game itself.

Here follows the summary of a few events in no particular order.

Listen up kids, don’t have lunch, serious conference call with colleagues, hunt an Epithal and stalk a POS at the same time.  Nothing good can come from this.  Trust me.  Yes, I did accidentally slow boat into a hostile POS.  No half measures here, I literally humped the leg of a missile battery.  The locals were amused, considering I had just missed their Epithal by < 2 seconds.  We all laughed, already replaced etc…   (grrr).

I recently opened a C3, found a lonely Heron scanning down the system and it didn’t take me long to do the obvious.  I tackled the pod, checked that the player had been around for a good long time and sent him home.  As usual, I sent mail asking whether the player needed advice what happened and a friendly email conversation ensues, the pilot was indeed an older one who recently came back, considers himself a noob and to top it all had been distracted by Real Life when I took him down.  This episode ended like they all do with me sending ISK to cover the boat (… many times over) and strong recommendation to join Signal Cartel.  Am I the only one who loses money when someone else dies? 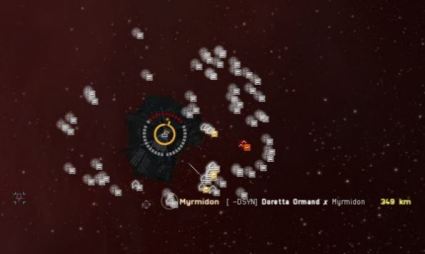 Mostly Prophecies, 4 Guardians and all sorts of other stuff.  A well-placed bomb could have been fun but it wouldn’t have killed anything.  The defenders were not putting up a real fight, a flight of fighters maybe, some Interceptor warping to a POS etc but nobody was getting killed. I left to do other things.  In hindsight, Zkillboard shows no structure kill at all for that system and I wonder what this was all about.

As both of my remaining readers may remember, I long had aspirations to become an industrial maven, a Henry Ford, a Lee Iacocca, a Walter White of New Eden.  It never panned out simply because industry above all things requires patience, something that I am simply not programmed for.  My industrial ventures so far probably resulted in net losses simply because I don’t bother spending the better part of a week to fine-tune a spreadsheet to generate a ISK 0.01 margin by doing clever things like hauling Ore from the Outer Ring to a Wormhole, make things and then export them to Jita.  I actually do these models for a living (yes, I am good at Excel) and while I know exactly how its done, in a game it bores me to tears.  But my alt corp is tucked away somewhere deep behind low sec, mining away when I am on conference calls. Its a nice set-up nearly free of traffic and certainly free of suicide gankers (they would have to venture through a dozen or so active low / null to get to me).  The downside is that exporting stuff is a royal pain in the rear, done either with a blockade runner, white knuckling Mad Max style (others) or (me) with wormhole routes.  So, last week I had upward of ISK 1.5bn in minerals in storage when I found a high capacity wormhole open from my base to somewhere between Hek and Dodixie.  Joyful, I started to fire up the diesels in my Kryos and exported minerals when I realized that it would take me dozens of trips.  Knowing my (lack of) attention span, I did what  a smart person* would do and impulse-shopped!  But not just another 2 Kryos for my alts, oh no.  Meet Wallow the Pig, my ISK 1.5 bn answer to export ISK 1.5bn of minerals.  Wallow does it slower than the Kryos fleet, crushes the hole faster than a tank crushes a can and will likely die to the hands of some elite high sec ganking group.  Oh and its so slow that I can easily make dinner, cure cancer and plan my vacation between gates.  But ain’t he cute?

But what shall I make?  I have not done a profit/loss analysis and decided to simply make what I use.  Thats right.  I make Mining Crystals.  T2 Veldspar, Kernite etc..  Yes, I fully know how stupid this is, that I should maximize my return, run Incursions and use the ISK to buy etc.  Yeah.  Or I could just spend a plex and buy what I need.  I am not (space) poor but this is a game, so screw it.  I am having fun making mining crystals for my own use.  For the market I will likely make ammunition, not sure which ones.  Will I make billions of ISK?  Nah, but if I can make a little beer money to fund my afk-mining team, that would be nice.  First of all, I need to make enough money to pay for Wallow the Pig since I discount all ships as NRE, not assets.  I may a perpetual noob bumbling across New Eden but EVE taught me that much…

*my wife reads this blog and I value my life

2 responses to “Impulse buying and other stories”