My RL is pretty busy right and now and I don’t get to play / blog much.  Its not that I am taking a real break, its just all a little slower.  All PI is turned off, recruitment is handled very competently by Skip and I enjoy the relative freedom to log in and just hang out, chat with friends and experiment with ships (I bought an Ishkur, great fun!).  But WH stalking is still my favorite pastime and at some point,  “borrowed” our CEO’s bomber (thank you), refitted it to my liking, packed a few hundred torpedoes and went onto an adventure, starting in a C6 that had opened up to us.  I really wanted to see if I could drop a Noctis full of C6 sleeper loot after my last attempt had failed due to the irritating competence of the opposing team…

So, with a song on my lips, torpedoes in the launchers and a prayerbook in my cargo hold, I jumped through the K162 and into the C6 temporary neighbor.  Oh, look towers!  A few minutes stalking around and yes, there are ships here, online and piloted.  My crew in the C2 reports that the scouting crew from the C6 is still active in our home hole but they want to join me on my adventure and whether I could spot them in.

But the locals figured out something is up and put quite a scary gate camp together.

A defensive WH camp – a little unusual for a C6 crew?

Ok, so I guess I am alone.  Since I don’t know when I log on next, I stuffed my skill queue and log somewhere safe.  Lets see what the next day brings…

I log in from a safe spot way beyond the D-scan of their towers and proceed to make safe spots and POS perches.  There are a few people online and I duly create list of the locals, adding them to contacts as I go along.  They have a ton of floating ships, including Caps in their POS-es but caps never scare me in my little bomber, I just hope I can see one in an escalation.

A thorough scan creates bookmarks for all signatures (just gas, 1 grav) and their wormholes – and oh look, there is a K162 connecting to a second C6 with a lonely Orca Industrial Commandship floating [see edit below – I was so dense I didn’t even realize that I know the pilot].   Even better, he is drifting away from the hole, not aligned to anything and seemingly asleep.  I am in a bomber.  This is too good to be true, yes?

A lonely, lost Orca, helplessly drifting away in space. My torpedoes are itching in their tubes. Can I resist the temptation? Should I?

But in Wormhole, Intel > brawns and I have a closer look.  first of all, the Orca’s name has “Exhale” in it.  Now I spoof names all the time and use AHARM often to pretend that I am a mean, coldblooded killer when in reality,  am not but the pilot really is in a corp that is in the Exhale Alliance.  They tend to be decent (understatement) at PvP and floating in the breeze is “unlikely”.  Secondly, what is he doing here?  This is a WH to another C6.  In lower class wormholes, an Orca is used to close it – a risky maneuver in itself but with the masslimit of this C6 hole, the Orca would have make a ton of jumps – generally, Dreadnaughts are used for this, not Orcas…

Ok, so its bait. It is obvious and not very smart bait and I expected something slightly better from Exhale, but so be it.  Lets see if the locals take it.  We wait.  All I see is the Orca drifting past at 20km.  I must say, I am very tempted to see what happens if I just drop some torps but I know it would be suicidal.  The Orca warps away.  To the local C2 static.  And he hangs there.  Same game.

The Exhale crew gets impatient and decloaks – not sure why – but I am surrounded all of a sudden by 15+ PvP ships.  The screenshot below does not capture the entire fleet.  I was busy changing my underwear after they all decloaked around me… 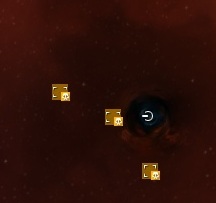 A very small fraction of the Exhale team posed for my screenshot. The other 15+ already warped away….

The poor sods didnt get the fight and are going home.  I understand.  The locals are clearly in their POS but are not bringing it.  If I was them, I’d consider closing that hole pretty soon….

The last ship warps away from the C2 connection and I jump to the K162 and into the arms of a waiting Onyx Heavy Interdictor – bubble is up and ready for me.

A Onyx is guarding the way back for the Exhale crew…

I am withing kissing distance of the Onyx when my Bomber glides to stop from its warp.  I carefully turn the boat around and sneak out of the bubble  – a single ship at this point could decloak me an ruin my day.  I hope that the locals are as dumb as I was and drop their ships onto the hole – maybe even one of the Caps.  It would mean a very fiery end of that cap ship and maybe I could squeeze off a few torps and get onto the killmail?  That would be sweet….

So we wait.  The locals are not bringing it.  I am tired and I fly to my safe spot and log for the day

Ah, its Friday night and my “hosts” are all assembled. At least 10-15 of that corp are online and milling around, some in the POS, some not.  I have Bookmarks for everything and am ready to do some damage.

The local crew is getting ready to do “something”.

My goal is still to let them run and salvage an anomaly – then try to catch the inevitable Noctis salvager.  With this many ships active in the system, this will be hard so, I need to get ready.  Perches are called for and I zoom around their anomalies and make safe warp-in and warp-out spots.  And almost run over a Zephyr.  Now that is an unusual ship as it does not get attacked by sleepers.  WH crews use it to get a quick view of an anomaly before their run it.  I am a few km away from him and could easily drop him but I really lust after that Noctis.  Giving the game away now seems silly.

A Zephyr. I landed about 30km away from him and motored back. My worry was that the Zephy is the warp-in point for the site runners and it not feel like getting run over by a Moros…

So.  All seems ready.  Get cracking, locals.  Someone jumps into an Archon.  One more into a Moros.  They warp out of the POS. Game is up.

But they vanish from D-scan. Never went to the anomaly.  They must be running another WH site or closing a hole or something.  And yes, here they are, back in the POS.  So, they closed some hole I didn’t know about.  Good, good, get on it already.

Nothing.  The Zephyr comes back to the POS and switches into a Helios.  Damn!  Stop scouting, go shoot something already.

Nope.  Ok, how about you do some grav sites, mine, do PI, do something? Nothing.

I make dinner in frustration when the CEO of that corp (by now I know all these guys, their alts and what their grandmother had for breakfast) jumps into a Moa – the only use for which is a gas miner.  Ok, I take that in desperation.  He warps away, me after him.  Gas clouds can decloak, so I want to stay 150km away from him until he drops a jetcan that I can warp to.  Then lock, torps away and hopefully bail before his 15+ POS residents land on grid and take me out.  Waiting for the jet can.  I am in position.

He warps away.  What? Geezus, what is it with these people.  D-scan shows me a few probes and a Helios that I dont recognize.  Damn.  Someone else crept into “my” C6 and is scaring my prey.  I could scream!

Back to the POS perch.  Some activity, no PI runs, no gas mining, no nothing and I decide to call it a night and scan my way out tomorrow.  I really had hoped for some glorious moment – dropping a Noctis, a cap ship etc. But what I experienced in this C6 for 3 days makes me want to stay in my C2 where there is always something going on.  C6 life seemed a lot more like nullsec….

Overall, it was fun, though, I got to stalk that hole, got to know them very well, their behavior, tried to anticipate their moves… Good practice for intel runs…

Edit: I just realize that  actually know the Orca pilot.  We flew together in the C4 with Z3R0 Return Mining.  How can I have missed that!  Good on you Thor to now fly Exhale, congratulations!  I just wished I had realized that earlier, maybe I could have helped to draw the locals into a fight…